Back to the Bakken

When we first visited the Bakken shale region in western North Dakota almost two years ago, 165 drilling rigs were operating in the area. They brought with them thousands of new workers, a large influx of heavy vehicle traffic, and a range of challenges for local governments trying to cope with this extraordinary growth.

On our return trip in mid-September, with oil prices at roughly half the level they were during our last visit, the rig count had fallen to 67.

We returned to North Dakota to see whether fiscal conditions had changed substantially for local governments in the region. During our November 2013 visit, most of these local governments were struggling to keep up with demand for new infrastructure. Though revenues had grown rapidly, this growth was insufficient to keep up with rapid demand for new roads, sewer and water infrastructure,... 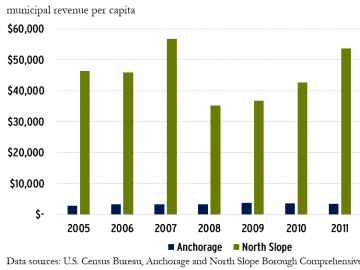 Alaska’s North Slope Borough was incorporated in 1972, several years after giant oil deposits were discovered in and around Prudhoe Bay. The Borough raises most of its revenue from property taxes; oil and gas property such as processing equipment, pipelines and other equipment account for roughly 98 percent of total property valuation 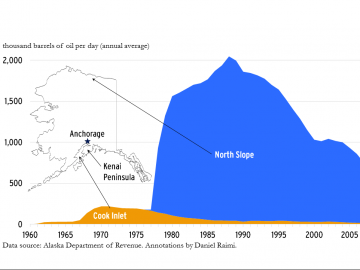 Alaska’s Kenai Peninsula, a three-hour drive south from the state capitol of Anchorage, boasts rugged mountains, icy blue rivers and abundant wildlife such as moose, caribou and grizzly bears. It also has a long history of oil and natural gas production and, like most other communities in Alaska, public finances are strongly affected by changes in their prices and production levels. 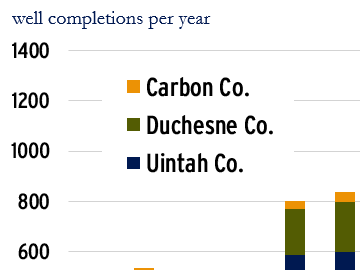 Much of the oil and gas production that takes place in Utah’s Uintah Basin occurs on land owned by the federal government, state government and Native American tribes. This fact plays an important role in oil- and gas-related revenue allocation for local governments, and has affected three neighboring counties – Carbon, Duchesne and Uintah – in distinct ways. 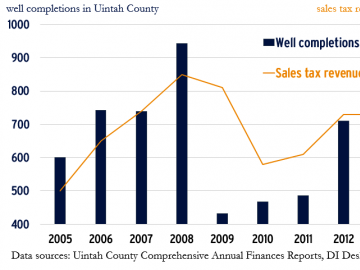 The city of Vernal, an isolated community in eastern Utah with a population of roughly 10,000, has experienced multiple cycles of oil and gas activity over the past several decades. It is the seat of Uintah County and benefits from tourism associated with Dinosaur National Monument, which sits just 30 minutes west of the city center and boasts an enormous store of fossils and excavation sites.

The government of Wetzel County, W.Va., has struggled through much of the past 30 years. The county’s population has steadily declined since 1980, when manufacturing companies and coal mining began shedding jobs and relocating. The county’s unemployment rate has been consistently higher than the national and West Virginia average, and hovered above 10 percent through most of 2014 (it is currently 9.3 percent, according to the U.S. Bureau of Labor Statistics). 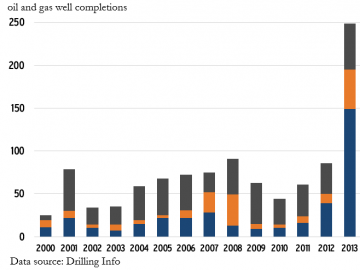 The Utica Shale formation has generated major interest in eastern Ohio over the past several years, with drilling activity and production surging in a variety of counties including Carroll, Monroe, Noble and Harrison. We visited these counties in early April to interview local government officials about the effect of this new development on their public finances. 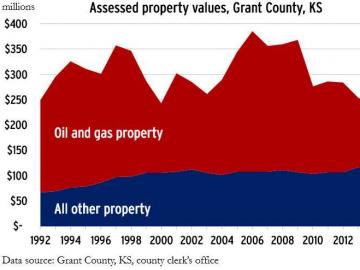 The Hugoton gas field covering much of southwestern Kansas is one of the world’s largest natural gas fields. Discovered in the 1920s, production from the Hugoton has declined in recent decades as pressure in the producing reservoirs steadily declines. Nonetheless, the Hugoton still produces substantial quantities of natural gas, and its high helium content makes it especially valuable. 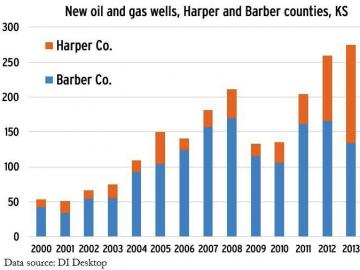 Oil and gas activity has surged in south-central Kansas over the past several years, led by production from the Mississippian Lime formation in neighboring Harper and Barber counties. 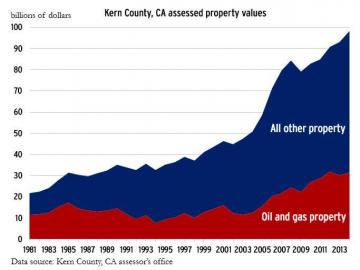 California produces more oil than all but three other states (Texas, North Dakota and Alaska), and Kern County is responsible for more than 70 percent of California’s oil production. Since the early 20th century, when oil was discovered in giant reservoirs such as the Midway-Sunset, Elk Hills and Kern River fields, the county’s economy has largely centered on oil and gas production.

The city of Long Beach, Calif., occupies an unusual position in terms of local government relationships with the oil and gas industry. Due to a complex series of negotiations and legal proceedings with the state of California through the first part of the 20th century, the city government is the working interest owner of the giant Wilmington oil field, which lies beneath part of the city and its harbor in an area known as the Tidelands. 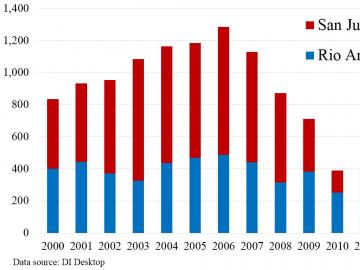 New Mexico’s San Juan basin, which sits in the far northwest corner of the state, has seen substantial increases and decreases in oil and gas development over the past 15 years. During the first part of the 2000s, thousands of coalbed methane wells were drilled in the region, producing large quantities of natural gas and relatively little oil. 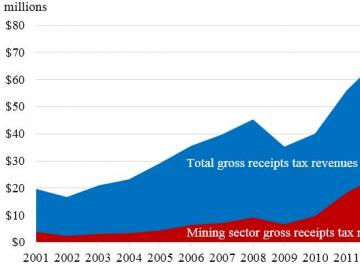 The Permian basin, which straddles the border of west Texas and southeast New Mexico, has been a leading producer of domestic oil and gas for nearly a century. Production in the region was roughly flat or declining through most of the past 40 years until around 2010, when the application of horizontal drilling and hydraulic fracturing allowed operators to access a variety of tight oil formations such as the Bonespring, Delaware and Wolfcamp. 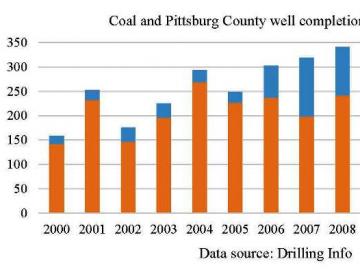 Budgeting through ‘boom and bust’ in McAlester

Natural gas drilling and production surged in southeastern Oklahoma during the middle part of the 2000s thanks to the application of new technologies to the region’s Woodford shale. Two counties in particular — Coal and Pittsburg — saw the most drilling activity during this period, and government revenues swelled as a result. 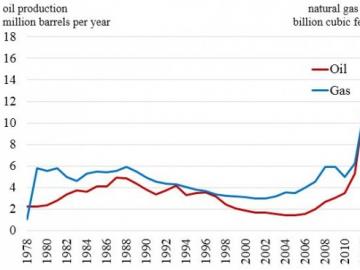 Oil and gas production has surged since 2010 across northwest Oklahoma, our first stop on this round of travel to research the impact of shale development on local government finances.

Since the mid-2000s, technological advances have led to a dramatic increase in natural gas and oil production from shale formations in the United States. Along with this increased production comes new revenues and service demands for local governments. 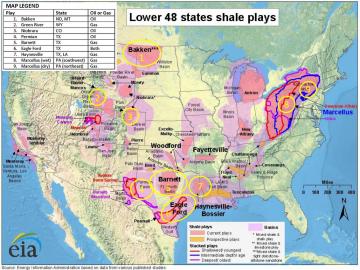 Setting the agenda for Phase I travel

During the initial phase of our research into shale public finance, the Energy Initiative sent Associate in Research Daniel Raimi to a number of key oil and gas production regions around the United States.

The next phase of the project

After traveling through eight states, visiting 10 major oil and gas plays, and interviewing hundreds of experts, the travels for the first phase of our Shale Public Finance project have come to an end. Now we will carefully analyze what we heard and review a number of other key data sources, and prepare reports presenting the major findings of our research. 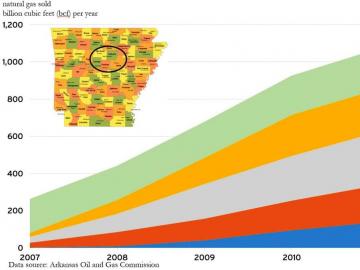 Arkansas’ oil and gas production history dates back to the 1920s along its southern border, near the colorfully named communities of El Dorado and Smackover. A more recent boom in production has come from the Fayetteville Shale formation, stretching across the rolling hills in the north-central part of the state, roughly an hour’s drive north of Little Rock. 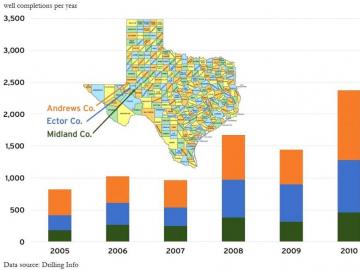 Since the 1920s, West Texas’ Permian Basin region has relied on oil and gas production as the driving force of its economy. After a boom period in the late 1970s and early 1980s, the region suffered economically through much of the 1980s and ‘90s, as low oil prices dried up business for the hundreds of oil field equipment and service companies through the region. Today, the Permian is booming again. 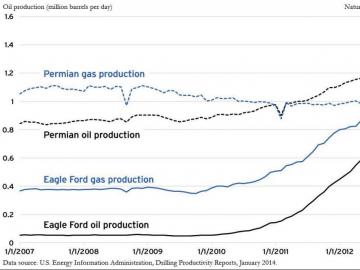 Although the oil and gas industry has historically played a large part in the economies of many Texas regions, large portions of Southern Texas have never been major producers – until now.

The name “Spindletop” holds a central place in American energy history. It was here, on a hill in southeastern Texas in 1901, that a group of prospectors brought in production from the first giant oil field in the United States. While oil had been produced in other parts of the nation previously, Spindletop’s massive scale of production signaled the beginning of a much more prolific era in American oil and put the state of Texas at the center of the national and soon-to-be global energy market.

The first gusher at Spindletop led to a rush of additional prospectors sinking dozens of wells in the area. These dozens of wells brought with them thousands of wildcatters, laborers, merchants and all other manner of entrepreneurs seeking their fortune — or just a steady living — in the oil fields. Seemingly overnight, the area around Spindletop turned from... 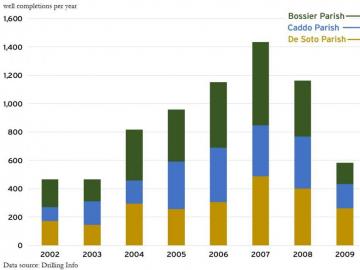 Haynesville governments retain fiscal benefits in the wake of a boom

The Haynesville Shale, which straddles northwestern Louisiana and northeastern Texas, is one of the most prolific “dry gas” plays in the United States, meaning that it produces natural gas without large quantities of oil or natural gas liquids such as ethane, propane, and butane. In the late 2000s, when dry gas prices were high, land in the Haynesville was some of the most sought-after acreage in the nation, with some land leasing for more than $20,000 per acre. 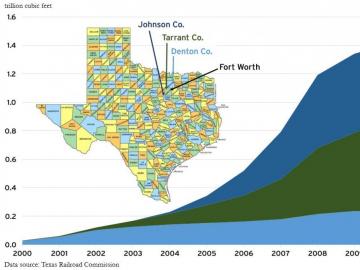 Government finance in the Barnett, home of the shale gas revolution

It was here, the Barnett Shale in northern Texas, that companies such as Mitchell Energy “cracked the code” to economically produce natural gas from shale rock. This discovery has led to unprecedented growth in natural gas and oil production around the United States, which in turn has had important implications for energy prices, debates over local environmental protections, energy-related greenhouse gas emissions, geopolitics and the subject of our work: local government finances. 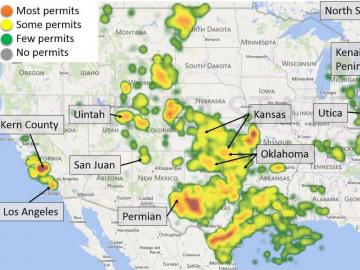 Building upon their prior work, and with the continued support of the Alfred P. Sloan Foundation, Energy Initiative Director Richard Newell and Associate in Research Daniel Raimi will conduct a second phase of the project. This phase will examine eight additional states, which means our research will have covered every major oil- and gas-producing state including Alaska. 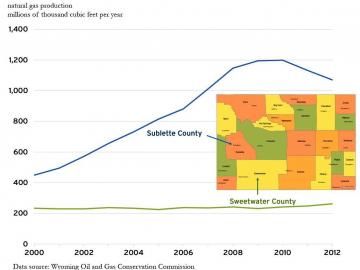 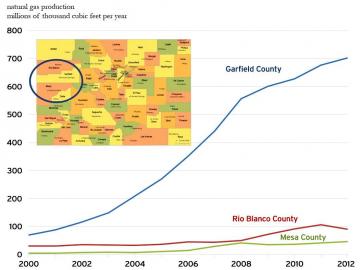 Arid, snow-capped mountains line Interstate 70, the main artery in Garfield County along which hundreds of wells produce a fast-growing supply of natural gas. Production surged during a boom period of 2007-2009, but has slowed in recent years due to falling natural gas prices. 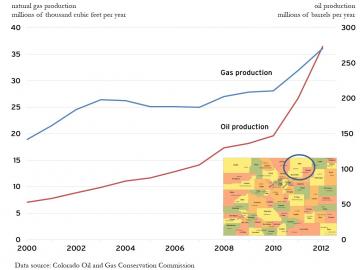 Oil production, government revenue grow in the shadow of the Rockies

A drilling rig operates in Weld County, Colo.Weld County, Colorado, lies just 30 minutes north of Denver. It’s been in the national energy community’s spotlight for two recent events: massive flooding in September 2013 that damaged a small amount of oil and gas infrastructure, leading to some relatively minor oil spills, and recent votes in several nearby cities in to impose bans or moratoria on hydraulic fracturing. 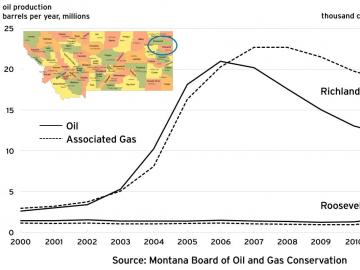 Beside the Bakken: Eastern Montana feels the effects of a neighbor’s oil boom

Although Montana counties such as Richland and Roosevelt have also experienced the effects of a growing population and economy resulting from Bakken development across the state line, relatively low oil and gas production in eastern Montana means that revenues for local governments have been far below those seen in western North Dakota. 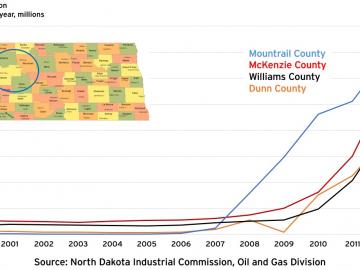 Public finance in the booming Bakken